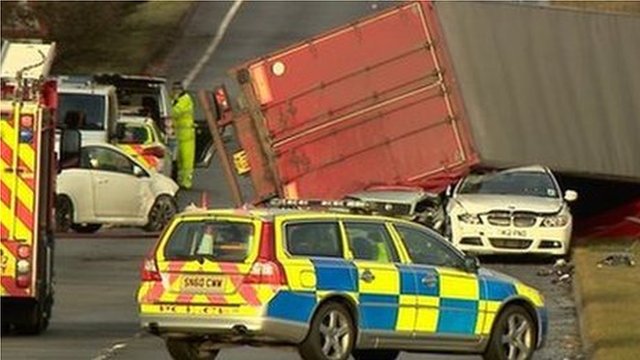 One man was killed in West Lothian when his lorry was overturned by the winds, as James Cook reports

A lorry driver has died after high winds caused travel chaos across Scotland, with trains halted and people being warned not to drive.

Police Scotland said the man died at the scene when his HGV was blown on top of two cars in Bathgate, West Lothian.

Scottish Borders Council said a number of properties in Eyemouth were flooded at high tide on Thursday afternoon.

At the height of the storm, winds gusting over 140mph were recorded on Aonach Mor in the Highlands.

The Met Office also recorded a gust of 106mph at Glenogle in Stirlingshire. Winds reached 59mph in Edinburgh and 63mph in Glasgow.

In Aberdeen, the River Dee has burst its banks at Riverside Drive. The road has since reopened.

There is a similar problem with the River Ness in Inverness at Huntly Street, where work was being carried out on new flood barriers. 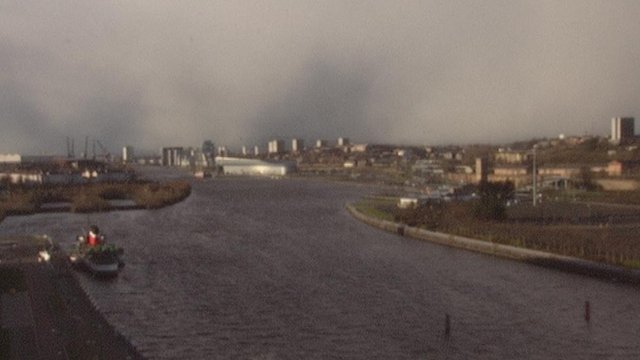 Time lapse footage of the storm on Thursday morning, taken from cameras on the BBC Scotland roof.

Aberdeen Coastguard said local teams had been called out to rescue people trapped by flooding on the Moray coast.

Ten people were helped from a bus in Buckie and two people were rescued from a car in Gardenstown after waves began washing over the harbour.

In Banff, a community centre had to be evacuated after part of the town was hit by flooding.

During the morning, Police Scotland escalated its travel warning to stage four red, and advised drivers to avoid travelling on the roads in the south, west, central belt and into south Perthshire.

By mid-afternoon, that had been reduced to stage two, meaning Scottish road users should travel with caution.

The only exception was Grampian, which remains at stage three.

Stewart Carle, chief inspector of road policing at Police Scotland, said almost every part of the road network had been affected by some sort of incident. 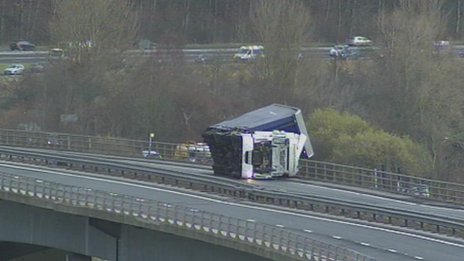 Drivers are still experiencing problems across Scotland due to trees and power lines that have come down.

Police Scotland issued fresh warnings about the dangers of snow and ice as temperatures dropped below freezing in some parts.

Conditions on the A96 were said to be treacherous at Inverness Airport where snow had fallen onto frozen ground.

There is now a skeleton train service running throughout the country but trains between Scotland and England remain suspended.

Many bridges were closed during the peak of the storm including: the Forth Road Bridge, Tay Bridge, M90 Friarton Bridge, A876 Clackmannanshire Bridge, A9 Dornoch Bridge, Skye Bridge, Erskine Bridge and Kessock Bridge. 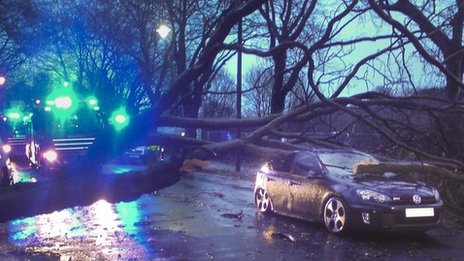 Trees crashed down on cars in a number of locations

The Erskine Bridge, the Forth Road Bridge and the Tay Road Bridge have now fully-reopened.

At the Friarton Bridge in Perth a lorry went over, leaving it close to a 100ft (30ft) drop.

The Dornoch Bridge has been closed to high-sided vehicles for the second time.

HMS Duncan, an 8,000-tonne Type 45 destroyer, was due to dock in Dundee but it has been affected by heavy seas and very strong winds.

It will now be delayed until late on Friday afternoon.

Earlier, a man was rescued after a tree fell on his car just after 08:00 in Davidson Main’s Park in Edinburgh.

And a man and woman were taken to Hairmyres Hospital after a tree fell on a taxi in Hamilton’s Bothwell Road.

A spokeswoman for First ScotRail said it had carried out a “controlled shutdown of the rail network”.

She said passengers on trains were brought into the nearest stations and taxis were arranged. In some cases, people were taken to nearby hotels.

ScotRail managing director Steve Montgomery told the BBC News channel: “We’ve had various problems, with trampolines, we’ve had haystacks on the line, we’ve had numerous trees and telegraph poles, right across the whole of the network in Scotland.

“We will gradually introduce services later in the day again but it is going to be a challenge for Network Rail to get out there and make sure all the lines are safe.” 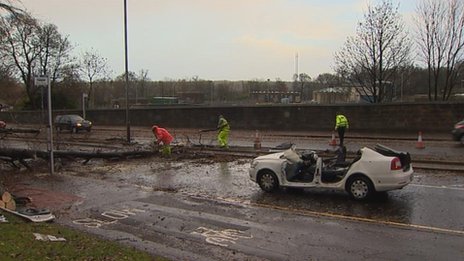 Network Rail said some routes would remain unavailable throughout the day as more extensive repairs may be required.

They advised passengers to check before they travelled.

Glasgow Central Station was closed all morning after being evacuated due to debris smashing glass in the roof.

No-one was hurt and arriving passengers were escorted from the building by station staff.

Scottish Fire and Rescue said they were struggling to cope with the number of calls they were receiving about falling masonry, fallen trees and road accidents.

Speaking at Holyrood, First Minister Alex Salmond told the Scottish Parliament that 195 schools had been closed because of the weather conditions.

Mr Salmond praised the “outstanding work of the emergency services” in responding to the severe weather. 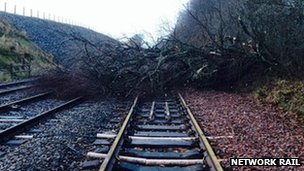 Air passengers were advised to check with airports and airlines before travelling.

The Dounreay nuclear site in Caithness was shut to all but essential staff. About 800 people work at the complex.

The Scottish government said its resilience operation had been activated to liaise with authorities and organisations across the country and to co-ordinate any activity as required.

Transport Minister Keith Brown added: “I would urge the travelling public to consider the conditions before they set off on their journeys.”

The winds are forecast to ease down in most areas in the course of Thursday afternoon. Freezing conditions are forecast for some areas however, including the Borders.

Have you been affected by the storm? You can send us your experiences using the form below.