About 5,000 properties were left without electricity as gale-force winds and persistent rain battered the south-west of England.

Western Power Distribution said the majority of the homes were now reconnected.

Several flood warnings and alerts have been issued by the Environment Agency.

The Devon and Somerset Fire and Rescue Service said it had taken over 60 weather related calls, including seven rescues of motorists in flood water.

Devon County Council said it had received reports of more than 200 flooding incidents and around 105 fallen trees.

A spokesman for the council said Torridge and East Devon have been among the hardest hit and a number of roads have been closed across the county.

The Tamar Bridge, which connects Devon and Cornwall, has been closed to high-sided vehicles, caravans and motorbikes.

Elsewhere, Brittany Ferries services between Roscoff and Plymouth have been cancelled.

The Met Office said gusts of 76mph were recorded at Berry Head in Devon.

Trains were unable to run between Newton Abbot and Plymouth because of a tree on the line at Ivybridge, Network Rail reported.

And trains between Newton Abbot and Paignton were also suspended because of flooding, with limited road transport operating between the stations.

First Great Western said there were “major disruptions” on services between Exmouth and Barnstaple, Looe and Liskeard and to and from Paignton.

Leigh- Ann Jones, from Ivybridge, Devon, e-mailed the BBC to say she started her train journey at Yatton, near Bristol, at around 10:00 GMT.

“The journey down was very wet,” she said.

“I couldn’t see out of the window it was so bad. We were lashed by the waves as the train went past Dawlish. The fields around the Somerset Levels were starting to flood and as we approached Devon and the swollen rivers began to run red with soil.

“We then experienced a tree on the line near Totnes, we were delayed at this point as there were three trains stuck by the tree just ahead of us.”

Isles of Scilly Travel said all flights had been cancelled between the mainland and the islands and rescheduled for Tuesday.

The King Harry Ferry, St Mawes Ferry and Cremyll Ferry services have all been cancelled.

Cornwall Council has closed a section of the South West Coast Path between Talland and Hannafore in Looe following “safety concerns”. 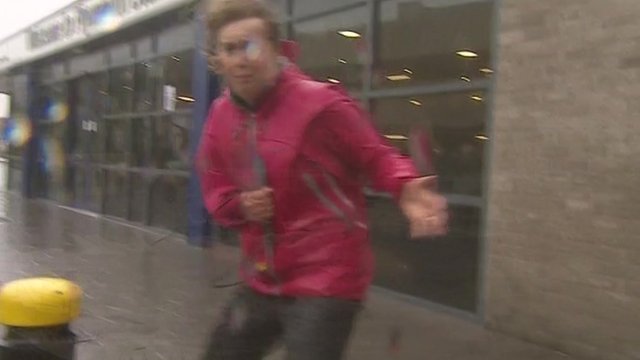 Market Street in Hatherleigh was closed after a roof was ripped from an outhouse and landed in the road at about 08:30 GMT.

The roof hit the Tally Ho pub, which was closed as a result and the chimney of another house before landing in the road.

A spokesman for the Devon and Somerset Fire and Rescue Service said the structure had become dislodged and that during the “tricky operation” the fire crew brought the dome down to ground level.

He added that the service had been “very busy” and has attended a number of incidents where tiles have come off the roofs of buildings and trees have fallen onto power lines.

In another incident, in Exmouth, a trampoline was blown from a garden onto a stationary car.

The fire service and Devon and Cornwall Police are both urging motorists not to drive through flood water after a number of rescues in the region.

Of the 5,000 homes affected by power cuts, Western Power Distribution said 3,000 homes were affected in Cornwall and a further 2,000 in Devon and Somerset.

By 21:00 GMT, the company said there were a remaining 750 homes in Cornwall and 61 in Devon still without power.

The company said engineers were working to restore supplies.

The Met Office has issued an amber warning for rain for the south-west of England until 09:00 GMT on Tuesday.